Google TV Will Be Very Much a Google ($GOOG) Search Product

Google TV Will Be Very Much a Google ($GOOG) Search Product

If Google TV’s “Trending on Google” Relies on Google Trends Data, That Is a Zeitgeist-y Hack of the Streaming Marketplace

Last September, I wrote about an intent-based aggregation service that Google had announced for mobile users, only, searching for terms like like “good shows to watch” or “what to watch”.  The user could choose which TV and movie subscriptions they already have, and get personalized recommendations for what’s available to them, and where to watch them.

It never got much more press attention, but as I noted then: “Of must-reads for understanding how Google is positioning its weight in the streaming space, [this blog post] is a must-read, as it reveals Google wants to help us figure out what to watch, and then where it is available.”

The rollout of the new Google TV Chromecast, which is happened today, takes that strategy and reframes it. As The Verge’s Chris Welch writes:

But while Android TV is the foundation of the new Chromecast, the whole experience feels very new. Because unlike TVs from Sony and set-top boxes from Nvidia and other brands that run the traditional version of Android TV, Google has created a new “Google TV” layer atop the operating system that completely replaces the old home screen experience.

Instead of letting you customize the home screen (Android TV gives some apps like Netflix and YouTube their own dedicated rows that you can move around or get rid of), Google TV is all about aggregation. It brings together content from all the streaming services you’re subscribed to and lists them all side by side in Netflix-like rows of recommendations.

There are dedicated tabs for movies and TV shows (along with a personalized “For You” section that mixes them together), but Google is clearly trying to break down the walls between streaming platforms. It’s the same thing Apple has attempted with the Apple TV app.

You can see an example of “Google TV” below. 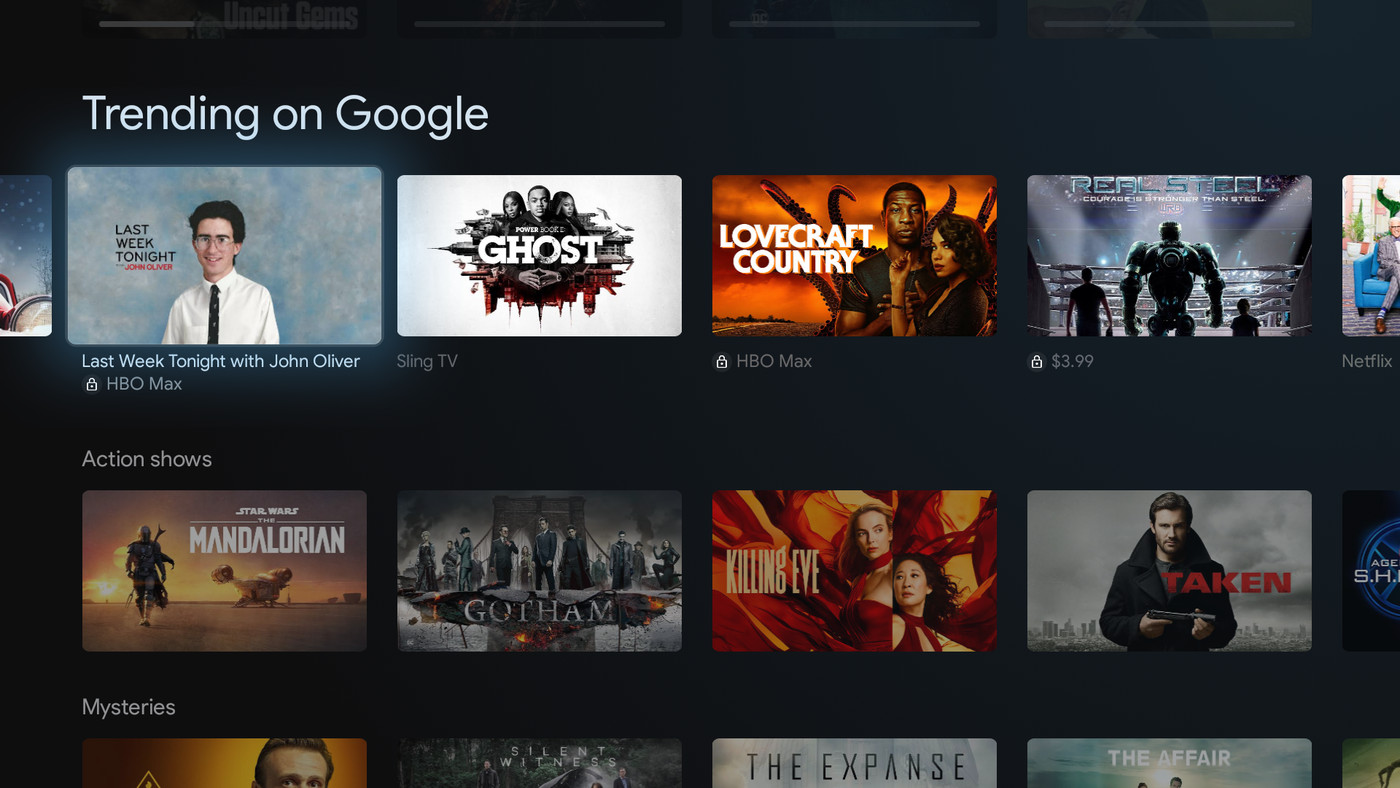 “Trending on Google” is what strikes me as a big evolution from last September. Google has already predicated its ads and YouTube business on personalization, so the announcement from last September seemed like a logical, though un-exciting, step for them to take.

“Trending on Google” could be really interesting, if not significant. Take, for instance, this chart The Entertainment Strategy Guy pulled for his great analysis on Mulan‘s opening weekend on PVOD.

Google Trends tells us what the search interest for those movies was at that point in time. What makes this interesting is whether “Trending on Google” within Chromecast is also driven by the same data set. Meaning, does a spike in searches for Mulan lead to a spike in Google TV recommendations of Mulan.

Because if it is, that is an extraordinarily compelling value proposition for consumers, and an extraordinary, Zeitgest-y moat Google will be able to build around Chromecast. Consider it this way: Netflix’s Top 10s and “Trending” is about what’s trending in the Netflix Zeitgeist. Trending on Google is about what’s trending in the Zeitgeist worldwide across every streaming apps, according to Google.

It looks and feels like an extraordinarily powerful hack of content aggregation in the streaming marketplace that only Google could pull off as a search company.

Mailings and analyses that highlight the connections between the big picture of the streaming marketplace and executive and investment decision-making at streaming companies.
SUBSCRIBE NOW

Curated “earthquakes”, key stories, and blog posts from the previous week which prepare you for your Monday am meetings.

Contact us to learn about our Elite plan, which includes consulting (1-hour meeting per Quarter) and our exclusive off-the-record meetings and presentations with C-suite and senior executives

Andrew A. Rosen is a former Viacom executive who worked and consulted closely with senior executives across MTV Networks and BET Networks divisions between 2005 and 2016.

You can read more about Andrew’s experience. He is available for consulting projects, and speaking engagements. You can contact him to learn more.